Seven colourful reasons to love a rainbow – each associated with one of the seven natural colours of the light wave spectrum.

Rainbows span a continuous spectrum of colours. The rainbow colours are the refractions of white light caused by the dispersion of sun-light by tiny water droplets that are present in the atmosphere.  A rainbow’s distinct bands are created by  human vision – no banding is seen in a black-and-white photo of a rainbow, only a smooth gradation of intensity increasing then fading towards the other side.  For the colours seen by the human eye, the most commonly cited and remembered sequence is red, orange, yellow, green, blue, indigo and violet.

What do we experience when we see a rainbow arc appear across the sky?  Mostly it brings a smile – we feel lifted, a little more hopeful that things will change for the better.  This is so, and has always been so in cultures and traditions around the world.

However ephemeral, a rainbow is our best natural and visible sign that hope is a reality.

Throughout the ages and across the globe people appreciate the rainbow as a bridge signalling that something better that is coming.  As the beautiful arc spreads a cross the sky we have a sign – evidence – that clouds do break, that the sun will shine.   However dark the present, the light will shine through. However stormy and dark the day, the sun is there unseen, yet ready to break through.

Green growth re-emerges from the challenge of blue with yellow, dark with light.

The arc is elusive – which is why the rainbow features in myth and folk tales.

The notion that gold can be found at the end of the rainbow is crazy.  We know it’s not true. Yet it makes us smile, because neither is it a a lie.  It’s a fairy tale.

The Irish tale is that if you left a few gold coins out at night, a leprechaun would come and fix your shoes. To protect their gold from being stolen, leprechauns will hide their hard-earned gold coins in pots at the end of rainbows. Now, if you were to catch a leprechaun putting gold coins into its pot while there was a rainbow, the you could demand the leprechaun give you all of its gold.

On the other hand, if you catch a leprechaun and choose to let them keep their gold, then you will be rewarded with good luck for the rest of your life.

The rainbow is optical illusion – caused by any water droplets viewed from a certain angle relative to a light source – is not an object. It cannot be reached and it cannot be touched.

Ever impossible to reach where it rests, or stand beneath its arch. Everyone sees it differently.

Impossible  ever to see a rainbow at any angle other 42 degrees from opposite the light source.
If you stand  “under” or “at the end of” the same rainbow I see, you will see a different rainbow—farther off— but at exactly the same 42 degree angle as seen by me.

So the legend of a  crock of gold lying hidden by leprechauns at the end of the rainbow is not about the fact of the matter, it’s a metaphor.   And it shines a light on how we relate  to life and experience good fortune.

So perhaps we can be open to the possibility of a crock of gold being true, while also  knowing it’s a fantasy – or is it both?

“Rainbows introduce us to reflections of different beautiful possibilities so we never forget that pain and grief are not the final options in life.” – Aberjhani 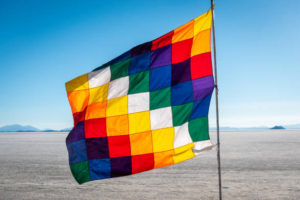 The rainbow inspired the Aymaran flag – the Wiphala – which is one of two official Bolivian flags.  It is a checkered rainbow that represents the indigenous wisdom inherited from Andean peoples.  The colourful flag symbolises the principles of Pachakama (universal order) and Pachamama (mother, cosmos), which is space, time, energy and our planet and of the transformation of natural environments into perfect harmony with human beings. Each colour has meaning – red reflects intellect and the cosmos; orange reflects culture and creation; yellow infers dual energy – masculine and feminine strength, unity and solidarity; white is time and dialogue that establishes reciprocity and harmony; green is hopeful renewal and the resourcefulness of nature; blue is cosmic space – the stars and natural phenomena of the universe; violet is the harmony that establishes justice and benefit for all

A bridge to the future

If we can be open to possibility, then, without any expectation, we can start to find the solution to whatever obstacles we face.

Whenever we hit difficult times.  We can be overwhelmed with events and pressures and feel lost, downhearted, afraid.

This is the moment to remember the rainbow’s promise.

Just as the air clears after a shower of rain, we can find  clarity inside the rainbow’s colourful prism.

“When it looked like the sun wasn’t going to shine any more, there’s a rainbow in the clouds.” – Maya Angelou

We use cookies on our website to give you the most relevant experience by remembering your preferences and repeat visits. By clicking “Accept All”, you consent to the use of ALL the cookies. However, you may visit "Cookie Settings" to provide a controlled consent.
Cookie SettingsAccept All
Manage consent

This website uses cookies to improve your experience while you navigate through the website. Out of these, the cookies that are categorized as necessary are stored on your browser as they are essential for the working of basic functionalities of the website. We also use third-party cookies that help us analyze and understand how you use this website. These cookies will be stored in your browser only with your consent. You also have the option to opt-out of these cookies. But opting out of some of these cookies may affect your browsing experience.
Necessary Always Enabled
Necessary cookies are absolutely essential for the website to function properly. This category only includes cookies that ensures basic functionalities and security features of the website. These cookies do not store any personal information.
Non-necessary
Any cookies that may not be particularly necessary for the website to function and is used specifically to collect user personal data via analytics, ads, other embedded contents are termed as non-necessary cookies. It is mandatory to procure user consent prior to running these cookies on your website.
SAVE & ACCEPT
Scroll to Top